Of Burgers and Men

Most young people today start their working careers in fast food. I'm no different. I turned 16 and decided to get a job to make a little extra money. I drove all over town and applied anywhere and everywhere. I handed in my application at Burger King and a middle-aged blond-haired lady asked me if I had a minute. We sat down and talked for a few minutes and I was hired on the spot. Thus began the job that was to consume the next 3 years of my life.

Before I begin recounting stories about the horror of working there, I would like to give a little information about the store. This post doesn't actually have any stories in it, it's more of a reference for any future stories I post.

Positions
Most positions started off at $5.15/hr
Cooks: Cooked the food (duh). This is what my job was.
Expediters: These are the people that grabbed the food off the chute and put it into the bag. Usually if you got the wrong item it was their fault as they didn't pay attention to the markings on the sandwiches and grabbed whatever they wanted.
Cashiers: Handled the money and rang-in orders.
Managers: Managed the employees, took inventory, basic manager stuff. They only made about $8.50 per hour.
Porter: The porter was the guy who came in after the store closed and cleaned the broiler as well as hosing off the floor. I was a porter for some time as well. The Porter position paid $6.50 per hour.

Cast of Characters
Names have been changed, but nothing else has. More people will be added as I recall them.

Dick Stuckup
Dick Stuckup was the owner of the three Burger Kings in our town as well as a few clubs and other businesses. He was a very shady guy, and to this date has had at least five heart attacks and a stroke. He was rumored to be a cokehead, which was later confirmed by another employee that was selling it to him. Dick would often come into the store acting tweaked out, sometimes wearing sunglasses inside. He would go on tirades about how people weren't doing things right, yet never really stayed in the store long enough to know how business went as well as the employees did. I can only assume that he was born into money or married into it as he didn't posses the people skills to start and operate a business by himself. His wife handled the paychecks and was really a sweet lady. I feel sorry for her.

Katrina
Katrina was Dick Stuckup's right-hand woman. She wasn't outwardly as mean as he was, but she was a snake in the grass that would complain about somebody behind their back. Their were unconfirmed rumors that she was a cokehead as well, and that she was sleeping with Dick.

Butch
Butch was the kind of guy you wouldn't want to piss off in a bar late at at night in the country. He was in his mid to late 50's with grayish hair and a mustache and beard. He was generally a nice guy despite his appearance of an angry biker, though it was fairly obvious he was into some shady dealings. He had one long pinky fingernail which is an obvious tell-tale of a cokehead.

Carmichael
Carmichael was a short and fat black male with a big bottom lip which caused him to talk like Biggy Smalls. His breath always smelled like rotten fish. It's probably pretty safe to assume it didn't come from a woman.

Carter
Carter was a skinny black man about average height. He was a very nice guy and would always talk to an employee calmly instead of yelling at them. He was a very laid-back fellow and we talked of fishing a few times though we never got the chance to go.

John
John was only about 5 years older than I was and got along with me very well. We would occasionally sneak out to the dumpsters and smoke a joint. Before John became a manager he was an employee, starting at about the same time as me. I only saw him occasionally while he was an employee since he worked mornings and I worked nights, so I'll just list him as a manager.

Teddy
Teddy was a short, chubby bald man with a mustache.

Chad
For the purposes of this story, Chad will be my name.

Devon
Devon thought he was a ganster. He was a tall scrawny black kid with a bad attitude.

Jr.
Jr. had the same name as Carmichael, as did his father. For the sake of simplicity I won't rename them all to the same name. Jr. was a shy young black guy maybe a year older than me. He didn't come in until probably my last year working there, but he was one of the best friends I had there.

Peter
Peter started roughly three months after I did. He was near my age and better educated than the other black workers there. My problem with him was his superior attitude which I overlooked because he was a hard worker.

Fryers: All fried food was cooked in these. Oil was filtered daily and changed weekly.

Broiler: The broiler is the heart of Burger King. If 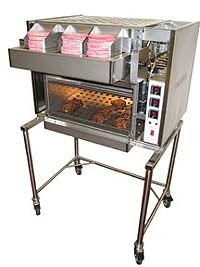 this went down we couldn't cook burgers. It's gas-fed and acts much like a grill except that heat comes from the top as well as the bottom. Since the frozen meat patties were disc-shaped you could stack them on the front of the broiler which had a rod to push them in one at a time. If this rod got bent (usually caused by the porter carrying it incorrectly) the machine would jam up. I couldn't find a picture of a broiler like ours. This one is similar, only ours had 2 extra slots at the right set at different temperatures to cook Chicken Whoppers and thick beef patties. Ours also seemed bigger because they kept a meat freezer underneath it. There's also a large metal enclosure connected to the ceiling that surrounds the top of it for ventilation.

Sinbad: This is what everybody called the fry hopper. This contained usually 3-4 bags of fries and would drop enough to fill a basket. This was a huge time saver over having to load them yourself. 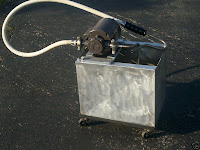 This was used to filter the oil at night. It consisted of a large metal square tub to dump the grease into, a filter, and a pump. The filter would sometimes get jammed which made the pump impossibly slow. 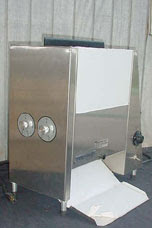 Does what the name says. You drop buns in the top and they get pressed between a conveyor belt and a heating element, coming out toasted at the bottom. These would often jam, and so we would have to use knives to unclog them. Because sticking knives into toasters is smart. This resulted in a lot of knives having burnt handles because a lot of the employees weren't smart enough to hold onto the handle and just tried to drop it on top of the bun.


Little Boy:
This was the technical name for the miniature meat freezer that beef and Chicken Whoppers® were kept in. This was kept directly beneath the broiler for quick access. Nobody refered to it as Little Boy and I'm not tempted to look through Google's images of little boys to find a picture.
Posted by Void at 9:52 PM